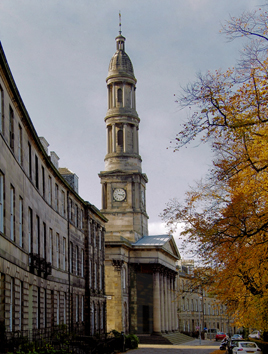 The site for the Church was decided upon on 11 September 1822 as part of Edinburgh’s New Town development. The architect was Thomas Brown who was Superintendent of City Works for Edinburgh and designed many streets in the city as well as major commissions such as Trinity House in Leith. The Church was opened for public worship on 12 December 1824, although the spire was not finished until the following year and the clock was installed in 1826.

Originally known as the Bellevue Church and then named St Mary’s Parish Church, it became Broughton St Mary’s in 1992 as a result of the union with Broughton McDonald Church.

Among the church’s most striking features are the stained glass windows, the oldest of which date from 1864. The attractive panelling around the front of the gallery is in fact heavily embossed wallpaper dating from 1897. The pulpit is one of the few surviving pulpits of the 1820s and is said to be the highest in Scotland. Its design is based on the Athenian monument to Lysicrates. The organ, built by Thomas Lewis of London, was installed in 1882. The centre pews were removed in 1997 and replaced by more comfortable chairs, which allow for flexible seating arrangements and varied use of the central floored space.

Robert Louis Stevenson’s grandfather, Robert Stevenson, was an Elder of St Mary’s for fifteen years, from 1828 to 1843. He was famous for his engineering achievements, being at that time Engineer to the Northern Lighthouse Board.