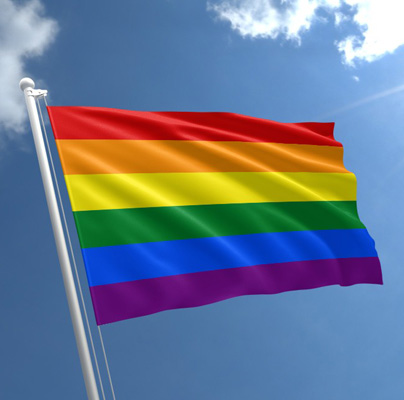 LGBT History Month takes place in February each year, and in recognition of this, our service last week included some words of reflection which are reproduced below.

Throughout history and still today LGBT men and women have suffered prejudice and persecution.  The Nazis arrested an estimated 100,000 and deported between 5,000 and 15,000 homosexual men and women to concentration camps.  Many were murdered.  Not only by the Nazis but also from beatings by other prisoners. Homosexual concentration camp prisoners were not acknowledged as victims of Nazi persecution in either post-war German state. Additionally, neither state contained a record of homosexual victims of the Holocaust. Reparations and state pensions available to other groups were refused to gay men, who were still classified as criminals.  This remained in force in West Germany until 1969. It was only in 2002 that the German Government quashed Nazi era convictions against 50,000 gay and bi men, and it wasn’t until 2005 that the European Union officially passed a resolution recognising homosexual people as victims of the Holocaust.

The above is a snapshot of the suffering of LGBT men and women.  There are many more examples.  In Edinburgh society, persecution may not be as extreme as that of the Nazis, but an undercurrent of discrimination is still around.  In other parts of the world discrimination is more open.  At Broughton St Mary’s we affirm people no matter their creed, colour, gender, sexual orientation, or age. The Presbytery of Edinburgh recognises that the Broughton area is a significant centre for the LGBT community and the Kirk Session has engaged with others as we seek to serve all in our parish and continue to be an inclusive worshipping community.

Some thoughts from overseas which are relevant to us here in Edinburgh.

Bishop Christopher Senyonjo is an Anglican priest and ally for lesbian, gay, bisexual and trans (LGBT) rights in Uganda. He continues to risk imprisonment and his safety by speaking out against homophobia, biphobia and transphobia, and preaching a message of acceptance and inclusion.

He writes “Sometimes it can feel like we have much to wrestle with in a changing world. While some of us find it easier to embrace greater diversity, seeing it as a part of God’s great design, others can find it confusing and difficult. But to turn away from the realities of some of our fellow men and women is to close the door of the church to them. The path for many Christians who are LGBT, and those who support them, is rarely easy. Faced with judgement and persecution, LGBT people have often felt excluded from the church. Sadly, some have turned away from the faith as a means of self-preservation. As Christians, we must learn to accept people who are lesbian, gay, bisexual or trans (LGBT) as children of God. There have always been LGBT people in the Church, and there always will be.

The words of a lesbian lady from East Africa: “ I’m a Christian, but I haven’t been to church for years. When I saw Christians calling for folk like me to be arrested, I gave up. I felt that church was taken away from me by these people. I read the Bible daily and I listen to pastors online, but I can’t pretend to sit in a church if the preacher is homophobic or if the congregation doesn’t accept me. But I know God listens to me wherever I am and wherever He is. If He didn’t love me or didn’t like my sexuality, I wouldn’t have been created. I don’t think anyone should decide for me or decide for God whether I should live or die, because God has seen that I should be alive and be here. So, I believe that God loves me the way I am, and that I can pray anywhere. That’s how I’ve been able to continue and grow in my spirituality as a Christian.”

Bishop Senyonjo:  “As we fully embrace and accept each other, it is my prayer that we know a deeper acceptance of God ourselves. Our God is compassionate and loves inclusively.”

Share this ArticleLike this article? Email it to a friend!
Email sent!